What is An Anxiety Attack? If you’re one of the 18.1% of people in the United States who suffer from an anxiety disorder, you may be familiar with the intense experience of an anxiety attack. Each second that passes during one of these episodes can feel like minutes or hours as your chest tightens up, breathing becomes difficult, and you’re overcome with intense and irrational fear. Many people have described anxiety attacks as feeling like they’re drowning on dry land.

“Anxiety attack” is not a formal, medical term. Rather, it’s a term used by many people to describe a wide variety of anxious responses that can sometimes be linked to certain specific triggers but can also occur unexpectedly for no apparent reason. The term can be used to describe a wide range of negative thoughts and sensations such as worries about an upcoming event all the way to intense, paralyzing fear. The first step toward managing and coping with anxiety attacks is to understand what they are and how to identify them.

Symptoms of an Anxiety Attack

It is completely normal to feel anxious in response to certain life situations and experiences. This is due to the natural “fight-or-flight” response when we’re faced with stress or danger. Anxiety attacks go beyond the typical anxiety or nervousness of everyday life and can lead to feelings of helplessness and other intense negative emotions. Anxiety attacks can show themselves in a wide variety of different ways; it depends on the individual. That said, these attacks generally include both physical and psychological symptoms. While some people may have a few mild symptoms, others can have a wider variety of more intense symptoms. It all comes down to how the body reacts to stress. Some of the possible physical symptoms of an anxiety attack include:

Some of the possible psychological symptoms may include:

What Is the Difference Between Anxiety Attacks and Panic Attacks?

You may hear the terms “anxiety attack” and “panic attack” used in a way that suggests they mean the same thing. This makes sense because they share some common symptoms, such as rapid heartbeat, shortness of breath, and dizziness. 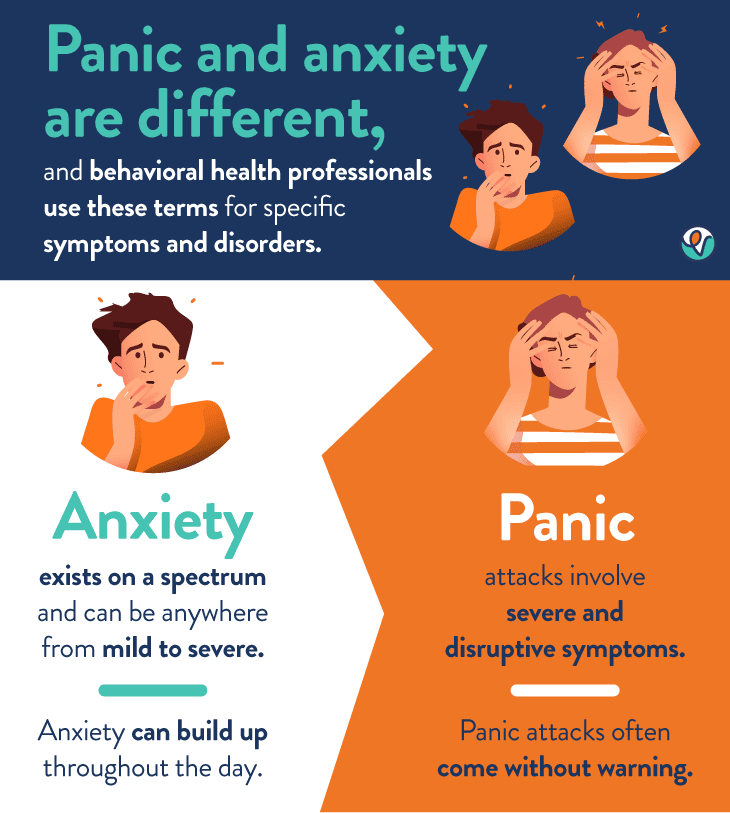 In reality, panic and anxiety are different, and behavioral health professionals use these terms for specific symptoms and disorders. Panic attacks are a sudden, abrupt surge of intense discomfort or fear that is accompanied by physical and mental symptoms. While this may sound similar to anxiety attacks, there are some key differences between the two. These differences include:

How Do I Tell if Someone Is Having an Anxiety Attack?

When an anxiety attack reaches its peak, it can become overpowering and crippling. Attacks are most often triggered by an episode of stress and exposure to fear. The person’s initial response to the trigger will quickly develop into a full-blown anxiety attack. Many of the symptoms of an anxiety attack are also symptoms of other serious medical conditions, such as a heart attack. Because of this, it’s not always an easy task to identify when a person is having an anxiety attack or something even more serious. If the person has a history of heart-related issues as well as anxiety attacks, the Anxiety and Depression Association of America suggests that all such episodes should be treated as if it is a heart attack. We know panic attacks and anxiety attacks can be very similar and often share similar symptoms. If the symptoms of the attack occur out of the blue and without warning, it’s very possibly a panic attack. If specific events or emotions trigger an attack more than once, there may be an underlying anxiety disorder that needs to be addressed.

What Can I Do to Reduce Anxiety and Anxiety Attacks?

In many cases, anxiety attacks are caused by certain emotional triggers or perceptions of threat. Identifying and avoiding these triggers can help reduce the chance of having an attack, but if the triggers are a normal part of everyday life, complete avoidance may be impossible. In these cases, it may be time to explore your options for the treatment of anxiety disorder. That said, there are a number of effective tools and techniques you can use that may help lower your overall levels of anxiety. Some of these techniques include:

Focus on slowing down your breathing. When an anxiety attack occurs, many people don’t pay attention to their breathing, and it becomes rapid and shallow. When a person is not breathing properly, it affects the level of oxygen in the brain, which can lead to even more feelings of anxiety and panic. When you take the time to make your breaths slow and deep, it increases the blood flow to your brain and may help you regain control of your body and emotions. Deep breathing is one of the best ways to lower stress in the body. This is because when you breathe deeply, it sends a message to your brain to calm down and relax. The brain then sends this message to your body. Those things that happen when you are stressed, such as increased heart rate, fast breathing, and high blood pressure, all decrease as you breathe deeply to relax.

One technique that some people find helpful in reducing overall anxiety is learning to identify and address negative thoughts. One way to do this is to keep a journal of your thoughts. When you write them down, it’s much easier to tell whether the thoughts are legitimate and rational. Sometimes we may get stuck viewing different negative or distressing situations in a similar way and then reaching conclusions without examining the evidence for those conclusions. These conclusions are often referred to as negative automatic thoughts (NATs). NATs are shown to be directly related to overall levels of anxiety. That means having these kinds of thoughts can be a trigger for feelings of panic, nervousness, and anxiety. By learning how to identify and then replace these negative thoughts with realistic and positive ones, you can learn to better control your reactions and responses.

Ignoring anything that triggers overwhelming anxiety will only lead to even more troubles down the road. It’s important to face the issues directly or they will continue to have control over you and cause anxiety. Therapy with trained and compassionate mental health professionals can help by supporting your recovery and teaching you strategies that will help you overcome your anxiety. This is especially true if your anxiety stems from instances of trauma. There are evidence-based therapies for helping people overcome symptoms that are brought on by traumatic experiences. Some of the therapies that are most effective in addressing anxiety include:

If you’ve found anxiety-reducing techniques aren’t as helpful as they should be, it may be time to talk to your doctor about trying medications that may help control anxiety. Medications that are commonly prescribed for anxiety include:

While these medications are clinically proven to be effective in treating anxiety, they can also be dangerous if misused. Benzodiazepines in particular are meant to be a short-term treatment for intense anxiety. Always speak with your doctor before considering taking medication to treat anxiety.

Treatment for Anxiety Disorders Is Here. Get Started Toward Wellness at a Vertava Health Clinic Today.

At Vertava Health, we believe unique treatment that is tailored to the client’s specific needs and goals is the key to long-term success. Not only do we work with the client to create a unique treatment plan for them, but we also employ a wide variety of team members who specialize in various areas of behavioral health medicine to ensure clients are getting comprehensive care. We’re here to help you break free from the prison of anxiety. If you are ready to start healing or have a loved one in need, reach out to us today at 888-601-8693.

Many people have described anxiety attacks as a feeling of losing control. The person may feel dizzy or lightheaded, have trouble breathing, or have an increased heart rate. They may also experience intense sweating or shaking.

What happens during an anxiety attack?

Anxiety attacks are triggered by certain stressful emotions and situations. Symptoms may include worry, restlessness, and possibly physical symptoms, such as changes in heart rate.

How do you calm an anxiety attack?

Many people find that focusing on their breathing can be helpful during an anxiety attack. Taking slow, deep breaths increases blood flow and oxygen to the brain. This potentially helps the person regain control of their overwhelming anxiety.

What triggers an anxiety attack?

Because anxiety is unique to every person, the triggers for anxiety attacks will vary from person to person. For someone who suffers from an anxiety disorder, anything that causes fear or discomfort can potentially trigger an anxiety attack.