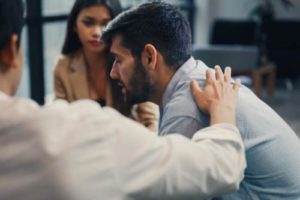 Cocaine is a stimulant drug that speeds up the messages traveling between the brain and body. It increases alertness, feelings of well-being, and energy. People typically use cocaine for the feelings of euphoria and energy it provides. It also can make people feel more confident. However, cocaine is a powerful, addictive, and dangerous drug that can have serious health consequences, both short- and long-term.

Many people continue to binge cocaine to continue the positive effects and decrease the negative effects, not realizing that repeatedly abusing cocaine over a period of time can increase paranoia levels and put them at risk for developing cocaine psychosis.

Cocaine psychosis is linked to the dopamine deficiency that can come from extended cocaine use. Dopamine is a neurotransmitter that helps control the brain’s reward and pleasure centers. It plays a role in motivation, learning, and movement. Prolonged cocaine use can decrease the amount of dopamine in the brain, leading to problems with thinking clearly, paranoia, and visual and auditory hallucinations. Cocaine psychosis can also intensify over time with continued use. It creates symptoms similar to less intense symptoms of schizophrenia and bipolar disorder. Some of these symptoms of cocaine psychosis include:

The three main symptoms of cocaine psychosis are paranoia, hallucinations, and delusions. These three symptoms can lead to a person becoming violent, excessively suspicious, placing themselves in real danger, or engaging in activities that result in conflict with others. If you or a loved one are exhibiting any of these symptoms, you must seek help as soon as possible.

Cocaine psychosis is a serious condition that can result in death if not treated. If you or a loved one are struggling with cocaine abuse and cocaine psychosis, seek professional help immediately.

It is important that a person experiencing cocaine psychosis stop using cocaine as soon as possible. This should be accomplished under medical supervision, ideally at a detoxification facility. Once the individual has removed the cocaine from their body, an assessment can be completed to determine the next stage of treatment.

Some individuals may benefit from medication to treat psychosis symptoms, and therapy is usually recommended. A residential or outpatient substance use treatment program is suggested for individuals who struggle with cocaine addiction.

At Vertava Health, we understand how difficult it can be to recover from cocaine psychosis. That’s why we offer a comprehensive approach to treatment that addresses the physical, mental, and emotional aspects of addiction. Our goal is to help you or your loved one build a foundation for long-term recovery.

If you or a loved one are struggling with cocaine psychosis, don’t hesitate to reach out for help. Our admissions counselors are available 24/7 to answer your questions and help you get started on the road to recovery. Call Vertava Health today at 888.601.8693 for more information.