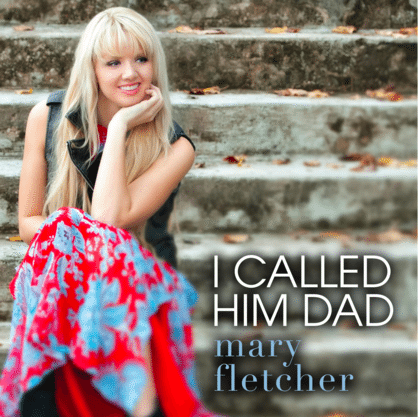 Nashville, Tenn., (December 16, 2015)–Country recording artist Mary Fletcher is pleased to announce that she has partnered with Vertava Health, a leader in addiction treatment and recovery programs in the United States, with her latest single, “I Called Him Dad,” available for download at Amazon, iTunes and Google Play. Fletcher penned the poignant song about her father, who passed away a couple of years ago from complications due to alcoholism. In honor of her father, Fletcher will donate 50% of proceeds from the download of the single to Vertava Health, who will match the donation to fund scholarships for those in need of treatment for alcoholism and substance abuse.

“I was angry with my father,” says Mary, who describes a close relationship with her Dad. “For many years, I knew there were issues, but as a kid who grew up around his addiction, I didn’t really understand the dynamics of it all until I got older,” she explains. “He wasn’t mean and held down a decent job, so his addiction wasn’t as obvious as some, but it was difficult on my family and ultimately cost him his life,” explains the 23-year old. “I miss him so badly and understand what these people and their families are going through, so I wanted to do something to help.”

At the recommendation of a friend, Fletcher made a visit to Vertava Health, headquartered in Nashville, Tennessee. Their admissions center receives thousands of phone calls and online chats every month from people who battle alcoholism and substance abuse, and their first priority is getting those people help. After talking with staff and discovering that Vertava Health also has a facility in her home state of Texas, Fletcher offered up her song, her talents, and her time to help in any way that she could.

“I Called Him Dad” is available now at Amazon, iTunes and Google Play. . Fifty cents out of every 99-cent download will go to nonprofit scholarship fund, Spring to Life, which helps provide treatment to anyone living with the disease of addiction.

“It is a beautiful thing that she is doing, and we couldn’t be more grateful,” says Vertava Health CMO Eric Mitchell. “Mary Fletcher is saving lives.”

While Mary Fletcher is still a fresh-face to the Nashville music scene, at 23, she is already a seasoned professional. Growing up in Texas, this singer/songwriter became entrenched in the music scene at a very young age. Efficient on the guitar and piano, Mary grew up performing on the stage at the Cactus Theater in Lubbock, Texas as a regular cast performer for nearly a decade. While there, Mary recorded two albums at Caldwell Studios in Lubbock, Somewhere and Christmas is Here.

One of those albums found its way into the hands Bob Heatherly, former Vice President of Sales and Marketing with Atlantic Records, who encouraged Mary to move to Nashville and pursue a career.

Immediately after graduating from Lubbock’s Monterey High School in 2011, Mary moved to Nashville. She studied commercial music at Trevecca Nazarene University before taking time off to work on her music full time. It wasn’t long before Nashville’s industry took notice of Mary’s talent, including Cody McCarver, longtime member of Confederate Railroad, who took her under his wing to help her champion her career, and hit songwriter, the late A.J. Masters (“Change My Mind”-John Berry, “Love Ain’t Like That”-Faith Hill), who began writing with her.

In June 2013, Mary released the Give My Love To You to country radio. The warmly-received 12-song album (available on Pandora Radio, Amazon, Itunes, CD Baby and Maryfletchermusic.com) was recorded in Michael McDonald’s studio in Franklin, Tennessee and features 10 songs co-written by Masters. Her current single, “The Idea of You,” climbed to #42 on Music Row’s Country Breakout Chart.